Dr. Saode Savary of Montreal will be part of the 20 person delegation of the Canadian Federation of University Women (CFUW) to the United Nations Commission on the Status of Women (CSW) in New York City taking place from March 13-24, 2017. The CSW is the principal global intergovernmental body exclusively dedicated to the promotion of gender equality and the empowerment of women. The discussion at this year’s session will focus on 3 areas:

1. Priority theme: Women’s economic empowerment in the changing world of work
2. Review theme: Challenges and achievements in the implementation of the Millennium Development Goals for women and girls
3. Emerging issue: The empowerment of indigenous women

The active participation of non-governmental organizations (NGOs) is a critical element in the work of the Commission on the Status of Women (CSW). NGOs have been influential in shaping the current global policy framework on women’s empowerment and gender equality: the Bei-jing Declaration and Platform for Action. They continue to play an important role in holding international and national leaders accountable for the commitments they made in the Platform for Action https://www.unwomen.org/en/csw/ngo-participation#sthash.ex0VFI0G.dpuf .

In the lead up to this session, UN member states were asked to undertake an internal assessment of their progress in the 17 Sustainable Development Goals identified to reach gender equality by 2030. Indeed across the board, progress has been slow and uneven, with some countries much further behind than others. With the support of non-government organizations such as the Canadian Federation of University Women the urgency of meeting these goals motives delegates such as myself to advocate for countries like Canada to take the lead in committing to accelerating progress for women and girls in all 17 Sustainable Development Goals.

As a Non-Government Organization with Consultative Status with the United Nations, the CFUW delegation will be actively participating in the discussions at CSW61. It is the hope of CFUW that States will reach an agreement on how developed and developing countries can work together to accelerate progress and ensure that gender equality and women’s empowerment remain central to the post-2016 SDG agenda as both a standalone goal and an Intersectional theme.

CFUW is a non-partisan, voluntary, self-funded organization with over 100 CFUW Clubs, located in every province across Canada. Since its founding in 1919, CFUW has been working to improve the status of women, and to promote human rights, public education, social justice, and peace 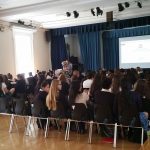