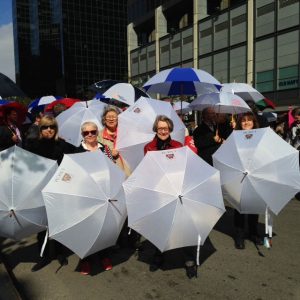 Centraide is an independent organization whose mission is to fight poverty and social exclusion. Through a network of 350 agencies and 57,000 volunteers, Centraide reaches families and communities in greater Montreal where one in four people between the ages of 18 and 64 were among the “working poor” in 2016. About 38% of the “working poor” are single parents under age 30: most of them are women and 27% are recent immigrants. They are 5 times more at risk of working poverty than non-immigrants (6%).

UWCM supports Centraide’s fight against poverty by joining each fall the March of 1,000 Umbrellas which marks the beginning of an annual three-month campaign for Centraide to raise money.

Our usual venue for monthly dinners, La Classe Restaurant, remains closed under government pandemic directives. Members continue to connect over the phone and through Zoom meetings and webinars.

Recognizing the need to help feed local homeless and disadvantaged women during this time, we recently donated funds to Résilience Montréal and Chez Doris.